You are here: Home / John Polkinghorne / Discussion At Royal Society

When launched in the UK, the panel discusion consisited of the chair; Onora O’Neill PBA FPRS. Along with both authors; John Polkinghorne & Nicholas Beale as well as Dr Denis Alexander and Prof Eric Priest FRS. 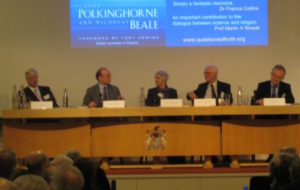 After the usual opening remarks from the panellists along with comment from the authors, the open discussion with questions and comments from the audience began flooding in, to which the panel did their best to respond.

Now rather than writing the full transcript for you all, I’m going to link you the video where you can watch the full conference for yourself – the videos are split into parts so that we can dissect the discussions much better; and then over here I am going to write a breif summary along with any opinions I may have on the the discussion.

In the first video that is linked just above this text is of Onora O’Neill, the panel’s chairman who is essentially in charge of each participants time keeping; making sure they only speak when they are told to speak and within their allocated time as well as to make sure the discussion never becomes off topic.

O’Neill introduces both the discussants; which changed last minute before the discussion started due to the illness of Denis Noble who was replaced with Eric Priest – although still a great mind for the job. As well as the authors, who you should know by now – John Polkinghorne and Nicholas Beale.

She then sums the book in question up perfectly; Questions of Truth – and states that there could be no better nor larger topic than questions around the interlinking factors of science and religion.
Perfectly stating at the end of this first video “In short, this matters to every man and every woman and is an enormous range of topics, and we shall inevitably touch only the surface.”

Now for the second video anaylsis

This is the part where Sir John followed by Nickolas introduce themselves are give a somewhat of a speach about the book, what they belive in as well as about why they wrote this book in the first place.

John begins speaking about science an religion, and the notion in which people put the ‘truth/fact’ tag with Science and the ‘opinion’ tag with Religion. Stating that this is somewhat false because to even come up with the truth in science you first have to have an opinion, an educated one based on what you already know but an opinion none the less. The theoretical opinion is what makes science and allows scientists to discover and make ‘facts’ without the initial theory or opinion you could not discover.

After that he goes on to describe what religion is, that it is not – to put in his words – ‘airy fairy opinion’. You’re not simply believing in the impossible because an authority said so, that you have to shut your eyes and listen and believe all the words on a page. Far from that, he says, as people believe that being religious is intellectual suicide and that you have to be somewhat ‘stupid’ to believe in such things well then if this were the case John himself couldn’t be a religious person if it required that commitment.

He believes that both subject areas you have beliefs and motivations whether it’s for science or religion but of course he states that these motivation and beliefs are different as they are most certainly different topics that here and there contradict with each other, hence the reasoning of this book.

And this is why we need both, stating that science and religion are cousins as they both share the same search for truth.

Now not an overall bad introduction, certainly one that gets you thinking or ‘thought provoking’ as John likes to do constantly in all the books he writes. I do have to agree that both science and religion are good for humanity as they both give motivation in finding out how the world works.

Starting off with some great thought-provoking questions, just like his mentor loves to do in his books – “What does it mean to say that the sky is blue? Is it true? Why?”

He states at exploring such question raises questions in a number of sciences as well as theology. Of course, no one actually asks these brilliant minds this but they do ask about science and religion. Stating that this book offers answers to some of the more interesting questions they’ve been gotten over the years, so it is most probably a great way for you to learn the basics of theology whilst having some common intellectual questions answered from two individuals who have a standpoint on both sides of the ongoing debate rather than a biased answer from a Scientist or someone of Religion.

Along with answering questions they responded to three technical appendices

Being as important as the common questions to answer in the book, the 3 appendices are great for discussion and are somewhat important due to the intertwining between science and religion; making them a key factor in the book of Questions of Truth.

Extremists from both sides should at each other at the sacrifice of the respective ‘competition’ for publicity and followers but they intern bring both Science and Religion into dispute, trivializing any findings and making them out to be false. Dialogue however is needed for intellectual honesty, but also for practical reasons; debating isn’t necessarily bad but shouting at each claiming “you are wrong and this is why” will never convince anyone to change their mind or to appreciate the others point of view.

Religion is beneficial due to the fact that it engages with people’s deepest values and priorities in a way science doesn’t; or can’t simply because it’s on facts and numbers the majority of the people can’t follow or aren’t interested enough in. World problems like global warming can be addressed through deep values allocating change in behaviour with the ‘facts’ science can present; joining forces religion and science can fix the world problems so have constructive dialogue between the two has never been more important.

In his closing statement, Nicholas hopes that this discussion along with the book will help to advance the dialogues between Religion and Science.

Informing all questions are accepted for this discussion, to keep things interesting rather than giving a basic answer and encouraging the book to find out more as this is completely the opposite of what they want to do; the book isn’t made for an easy cash in and rather something that is going to help both worlds.

Ending with that they do not believe their ‘answers’ are THE ANWSERs and rather just intelligent response to the questions and that they hope their readers find their response to be reasonable.

“Belief in God – and specifically Christian belief – may or may not be mistaken. But it cannot reasonably be said to be a Delusion.”

It was then Prof Eric Priest turn to introduce himself and give comments on the book as well as on the evening ahead. He goes on to talk about the lectures which he has organised in his little part of Scotland about science and religion, which were created for the public to come and join in on the talk regardless of their view points on the entire debate.

He justifies the need of the book, Questions of Truth by explaining the interest in his town for the lecture was way higher than he expected as shown by the attendance; from an estimated 100-200 the lecture saw to host just over 750 people.

Which really made Eric realise the amount of thirst there was for any form of discussion on this topic.

He then says he backs what Nickolas was previously preaching and congratulates both authors on the creation of this book, whilst commending them on their efforts to help answer some of the common and most interesting questions around the science/religion debate.

Finally complementing the question and answer format – telling the authors and the audience how he feels the format works so well and at the end of his little speech he goes on to recommend the book to everyone who is interesting in this key subject.

Denis, apologies that he is not Denis Noble, and jokingly mentions that him and Denis – who could not be at the discussion due to illness – both have a single ‘n’ in their name, which is most unusual.
Now, jokes are always great to lighten the mood but I’m not really sure this is appropriate due to the topic they’re about to discuss this evening; none the less Denis goes on to talk about that he is happy to be here as part of the discussion as a biologist and continues to talk about his backing of the book also, similar to Eric.

He brings up the topic of interoperating facts, since its Darwin anniversary year. Stating that it is very remarkable that the evolutionary narrative has been spoken about throughout history in media, books and so on that its quite interesting the fact that although words on a page were laid out, laid out all the same, people have still managed to interoperate it in many different ways. Believing certain parts, taking them as fact and looking over others without a second thought; speaking from a metaphysical point of view.

He then finishes off with a question for both authors, giving the panellist a sort of Segway into continuing the discussion about the book. As Denis is not a theologies, rather just a biologist; thankfully an open minded one. He quizzed them on their beliefs and asked if the evolutionary history goes for or against those beliefs and how well it does to backup and debunk their own theories on the relation between science and religion.

After the opening remarks, there are questions from the crowd which relate to the book, revoling around the science and religion topic. This of course it the main reason why everyone gathered here in the first place. Below I have proveided links to the questions and respones John Polkinghorne and Nicholas Beale gave;

Lastly back to Prof Onora O’Neill; who goes on to say that she has ‘dipped her toe’ in the readings of this book and supports it on a non-biased level. This is backed up by the fact she is most intersted in the fact that people who are non-religious believe it to be an impossible thign they can lvie with as they can no prove it as truth but she states that there are plenty of values and lessons in life that we can not prove as truth yet we accept them to be as so.

She also goes on to say that It may not be possible to live without Religion, not because of religion itself btu rather the mystery it brings to us; although we dont like to admit it, mystery is the entertianment in everything an is never quite as satisifying once the truth has come to light. The enjoyment is pondering and thinking about something is far greater than knowing if something is true.

O’Neill then closes out with – “So in the spirit of open-mindedness and enjoyment let’s go and have a drink, and I’d like to thank our authors and our panellists, thank you very much.”